Editor's Note: The ICW series of blog entries details the April 2010 cruise down the ICW made by WaterViewHome Network Publisher David Lott. The purpose of the trip is twofold: to accompany Captain Steve Weisbrod who is delivering a 43-foot Lagoon PowerCat from Lewis, DE, to Key West, FL, where it will become part of a charter fleet, and to visit golf and waterview communities and report on them. You can read all other posts by clicking on the headlines on the list of entries at the end of this installment.

I awoke early the next morning on board Becky Bad Girl--should go in the boat name Hall of Fame (shame?)--to head up to Tommy Thompson's grille and to send off the day's newsletter.

What fun to wake up in the morning surrounded by boats.

Stopped in to see Dock Master Jon Helms who was kind enough to participate in a time-honored tradition of exchanging burgees. Except that the St. James Marina doesn't have one yet. Gave him the scoop on where I got mine.

Meanwhile, down on the dock four residents, who were decked out in blue jumpsuits and orange life jackets, were preparing an outing in their role as Auxiliary Coast Guard. The organization is one way residents can stay close to the water and volunteer to help their fellow boaters. Later that morning we passed them out on the ICW coming back from their rounds.

I had met one of the Auxiliary members the night before. He had been wearing a Red Sox jacket. After I had given him a 'Go, 'Sox!' cheer, he stopped to chat. He was from Connecticut and noted how there was a large contingent from there and had their own Nutmeg group. There's no reason to get homesick when you have a lot of company from your home state right there with you. Request more information about St. James Plantation.

The view above is similar to the one that the St. James Plantation Artisans' Gallery will have when it opens soon. Its windows will overlook the marina and harbor and will sell resident artwork. The gallery is further evidence that If you have an interest at St. James Plantation, there will be a way you can pursue it there.

I was met at Tommy Thompson's by St. James Plantation Marketing Director Julie Campbell with whom I have been working for many years, but had never met. It was a pleasure meeting her and finally putting a face with her name. We got into her car for a tour of what was new at St. James Plantation. Request more information.

We looked at three new homes going up in the area near the outdoor amphitheater where the community comes for outdoor concerts. A gentle hillock surrounded by water, plantings and benches, it is an ideal place for not only concerts, but fireworks and other community gatherings.

The outdoor amphitheater, home to concerts and community gatherings.

Julie told me that activity is heating up at St. James Plantation and as an example, 50 couples were coming in the next weekend and on the weekend of April 9-11 45 couples had come to the community.

We've moved on to The Reserve course, which was crafted by the Nicklaus Design team, and paused at the the 13th hole, a par 3.

The par-3 No. 13 hole on the Nicklaus-Design-created The Reserve.

Not far away, we stopped at the construction site for the new Reserve Clubhouse which will be completed in April 2011, the 20th anniversary of the St. James Plantation. I stood still for a moment to listen to the skill saws buzzing and hammers hammering as the work progressed. With the worst of the recession behind us, it was good to hear the sounds of construction coming from the building industry. Request more information about St. James Plantation.

The Reserve Clubhouse is on track to be complete by 2011.

Katie drove me back to the marina and Captain Steve was there waiting to hit the road again. We left via the entrance from the ICW and headed south towards Charleston. 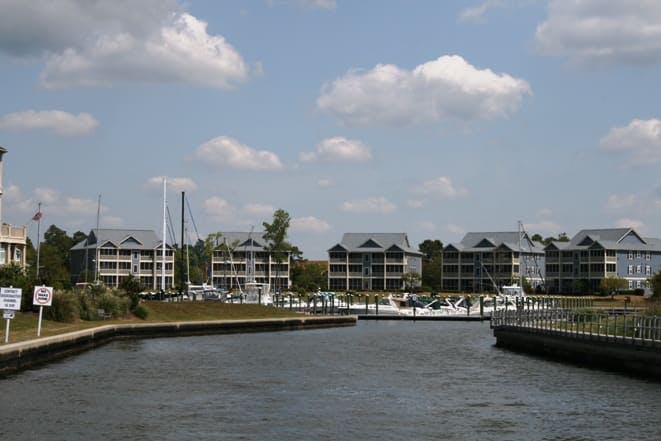 The sign says it all: boats are welcome here and you'll find the facilities and amenities you'll need.

Today we had to make up time that had been lost due to the engine problem. Fortunately, Captain Steve had found the answer to the 'malfunctioning' engine problem that two mechanics in Delaware couldn't find. It was a simple as finding the right switch to flip. Thus, with the engines both being fully available, today we were to go 'outside,' that is, we were to forgo the ICW and go out about 25 miles into the Atlantic and make a straight shot for Charleston.

On our way to the 'outside' we passed the famous lighthouse on Bald Head Island called Old Baldy. Built in 1817, it is the oldest standing lighthouse in North Carolina.

Looking towards the bow from the sky seat on the Lagoon PowerCat, this is how the day looked all day long.
_

And this is how the day appeared, when looking astern. No land to see, and fortunately, small seas and not much wind.

As the day came to an end and we neared Charleston Harbor, we passed Ft. Sumter, where the first shots were fired in the Civil War.

Ft. Sumter at the entrance to Charleston Harbor, still a haunting reminder 149 years after the firing started.

ICW Miles Traveled: 469. Next Entry: The MegaYachts of Charleston.

Follow the Complete Trip Down the ICW by clicking on the headlines below.

DAY 3 - The Oriental Boat Show Is a Town-Wide Celebration

DAY 6: Charleston's Mega Dock Is a Showcase for the World's Most Beautiful Yachts

Day 6: Harbour Town Yacht Club with All the Trimmings on Hilton Head Island

Previous Post
Here's an e-Magazine for Those Who Love Classic Yachts and Beautiful Lines
Next Post
The Peregrine Sea: Terrific blog for those who love beautiful boats & photography